"Men called him Thû, and as a god
in after days beneath his rod
bewildered bowed to him, and made
his ghastly temples in the shade."
― Lay of Leithian, Canto VII, vv. 2064-2067

Thû, the Necromancer and Lord of Werewolves, was a character that is featured in The Book of Lost Tales, the early writings that would evolve into The Silmarillion. Thû would later evolve into the character of Sauron.

Thû, also referred to as the Lord of the Werewolves, replaces an earlier villain, Tevildo, the Prince of Cats, and also assumes some of the traits of Fankil. He is the chief captain of Morgoth, as well as a necromancer in command of Orcs, Phantoms, Werewolves and other "misbegotten or spell-wronged" foul things.[1]

In the Lay of Leithian Thû, also known as Gorthû, holds the Wizard's Isle and is a necromancer who controls phantoms. He spots Beren and Felagund. After he interrogates them, he engages with Felagund into a battle of mind and songs, until Felagund's power fell, and they returned to their own original forms. Thû then places them in his dungeons sending a werewolf to devour one of them, hoping to learn their errand.[2] Later he sends werewolves, and Draugluin against Lúthien and Huan, and takes the form of the greatest werewolf to defeat him. However Huan bites him on his throats and is obliged to give them the keys to his tower. He then transforms into a vampire and flees.[3]

Thû escaped the Battle Terrible which saw Morgoth's ousting. Following his old master's downfall, his Shadow falls over Middle-earth and some Men are corrupted to his allegiance, becoming his followers and worshippers. [1]

Sûr and the Fall of Númenor[edit] 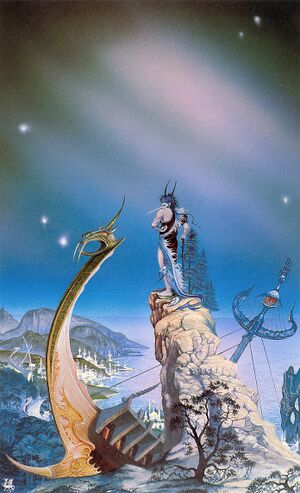 The Haven of Moriondë by Roger Garland, depicting Sauron's triumphal arrival to Númenor according to the early version published in The Lost Road.

In the 1930s, when Tolkien introduced the legend of "Atlantis" to the Legendarium of the Elder Days, Thû is connected with the Downfall of Númenor. Known as Sûr in Qenya and Thû in Gnomish, he arrives to Númenor in the form of a great bird, during the reign of King Angor and Queen Istar. In a later version, Sauron is a conqueror to whom the proud King Tar-kalion summons with messengers; Sauron complied as he was afraid of the Númenoreans and preferred to destroy them by malice. Approaching the isle, the sea launched his ship upon a hill whence Sauron preached deliverance from death and prophesied the return of Morgoth and among those who believe his lies are Tar-kalion and queen Tar-ilien. A temple was built in the midst of the land, where he dwelt. In both versions Sûr/Sauron convinced the king to conquer the West to gain eternal life, events that led to the Downfall.

The King of the faithful Númenoreans who survived was Agaldor/Amroth/Elendil, who allied with the Elven King Elrond/Gil-galad of the Elves against Sûr's fortress in the inner land (in the second version of that text, that land is named Mordor for the first time). In the fight Sûr slays the king but is defeated. In the first text he is driven out to the dark Iron-forest in the center of the Earth and the Men destroy his dwellings; in the second text his bodily shape is destroyed for many ages and his servants dispersed.[4]

Thû is related with the root THUS-, "stench, evil mist, darkness".[5] In subsequent stories, his name evolved to Gorthû, Sûr, and finally to Thauron (pronounced Sauron in common Quenya), with similar meanings.

In another source, Thū is given as a Sindarin translation of Súlimo, an epithet of Manwe, which shows that the name could also be related with sûl ("wind").[6]