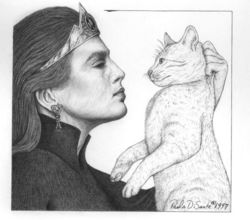 Berúthiel and the white cat, by Paula DiSante

"It won't sound too pretty to say you've caught the kitten and let the cat escape."
― Gorbag in The Two Towers, "Shelob's Lair"

Cats were animals that lived in Arda.

Other than use as company, for which the Hobbits and Bree-folk used pets,[1][2] cats were used for the hunt[3] and for spying.[4] They were soft-footed,[3] keensighted[5] and agile.[6]

The cats of Queen Berúthiel[edit]

In the late ninth and possibly early tenth century of the Third Age, Berúthiel, wife of Tarannon Falastur, the twelfth King of Gondor, kept cats, nine black and one white. The marriage of Tarannon and Berúthiel was not a pleasant one: his love for the Sea drove her mad. She hated all making, all colours and elaborate adornment, and spent much of her time in her austere chambers with her ten cats. She hated all making, all colours and elaborate adornment, and sent her cats out to spy on everyone, learning their dark secrets. Berúthiel conversed with the cats and may have been able to read their memory. She even set the white cat to spy on the others, to torment them. The cats were feared and reviled in Gondor, and people cursed upon seeing them. Berúthiel's reign of terror only came to an end at last when Tarannon banished her from the realm. He put her and her cats alone on a ship and set it adrift before a north wind. Berúthiel and her cats were last seen passing Umbar, sailing away into the southern seas.[4]

All memory to them was erased (and the Book of the Kings), though legends of the cats and their ability to spy remain.[4][5]

Though there are no other cats that play a large role in history, some are mentioned in Hobbit folklore (for example, the Hobbit poem Cat[7]). Bob, the ostler of the Prancing Pony, had a cat. After Frodo Baggins sang The Man in the Moon Stayed Up Too Late (in which the ostler of an unnamed inn had a tipsy cat that played a five stringed fiddle), several patrons suggested that he had to do the same.[2] Similarly, a cat, or "four-legs", was part of an old riddle Bilbo asked Gollum.[1]

One of the more important cats in the development of the legendarium was Tevildo, the Prince of Cats. Mentioned only in early writings of The Book of Lost Tales, Tevildo was a demonic servant of Melko, who would eventually be replaced by Sauron.[8] He is the principal antagonist in The Tale of Tinúviel.[9] Other cats appearing in The Tale of Tinúviel include Miaulë, Oikeroi, and Umuiyan.

Tinker is a cat appearing in Roverandom.[13]

Especially in the case of Berúthiel and Tevildo, cats in Middle-earth are portrayed in a negative light. It could be argued that Tolkien was not a cat-person. When a cat-breeder asked permission to use names from The Lord of the Rings for her cats, Tolkien replied to Allen & Unwin:

Cats are found throughout Middle-earth, especially in Bree-land. There is a "cat lady" who has a house full of cats. Lore-masters can also have a non-combat cat pet.