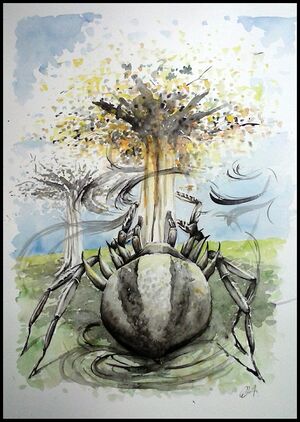 Darkening of Valinor was the destruction of the Two Trees of Valinor, by Morgoth and Ungoliant in Y.T. 1495. The five Valian Years between the Darkening and the rising of the Sun was known as the Long Night.[1]

After Melkor sowed discord among the Noldor and fled Valinor, Manwë held a feast for the reconciliation of the Eldar. There Fingolfin publicly forgave Fëanor. In the meantime, the Dark Lord found Ungoliant in Avathar and asked her aid against his enemies. Ungoliant helped Melkor infiltrate Valinor by shrouding both herself and her ally in webs of pure darkness. Once within Valinor, Ungoliant drank the light from the Two Trees after Morgoth wounded them with his spear. She also drained dry the Wells of Varda so that nothing remained of the Light of the Two Lamps save that of the Silmarils of Fëanor.[2]

Then the Unlight of Ungoliant rose up even to the roots of the Trees, and Melkor sprang upon the mound; and with his black spear he smote each Tree to its core, wounded them deep, and their sap poured forth as it were their blood, and was spilled upon the ground. But Ungoliant sucked it up, and going then from Tree to Tree she set her black beak to their wounds, till they were drained; and the poison of Death that was in her went into their tissues and withered them, root, branch and leaf; and they died.
—Of the Darkening of Valinor

After this terrible act, Ungoliant and Melkor fled to escape justice at the hands of the Valar. They killed Finwë in Formenos and stole the Silmarils. Enraged, Fëanor refused to surrender the Silmarils to revive the Two Trees, and when he learned about their theft, he rebelled against the Valar. He persuaded many Elves to go with him to Middle-earth and the Flight of the Noldor began, but when he demanded the swan-ships of the Falmari, he resolved to the First Kinslaying to steal them. This event caused the Fall of the Noldor.

During the Flight, Mandos (or his messenger) appeared before them and spoke the Doom of Mandos. Finarfin abandoned the host, but the Sons of Fëanor responded with the Oath of Fëanor.

In Beleriand, Orcs besieged the Havens of the Falas; the First Battle of Beleriand occurred. The Sindar withdrew in Doriath, inside the Girdle of Melian that was set around. The Laiquendi also remained hidden. Soon after, the Noldor arrived and Feanor was killed in the Dagor-nuin-Giliath. Maedhros was also captured and chained on the Thangorodrim. The Noldor refused to depart and camped at Mithrim.

The remaining host of the Noldor under Fingolfin crossed the Helcaraxë and entered Beleriand to engage in the Battle of the Lammoth. The Moon rose and after seven times, the Sun followed.

1 September: A Shadow of the Past:

During Galadriel's summarization of the First Age, the destruction of the Two Trees of Valinor are seen briefly being burnt to a crisp beneath a shadow of Morgoth. Ungoliant's role in their destruction is never mentioned, nor is she seen.

When Elrond informs Lord Celebrimbor that the High King will be arriving in a few days, expecting to hear a solution to the fading of the Elves, Celebrimbor ponders on whether they could do more with less, referencing the fruits of the Sun and the Moon, the last remnants of the Darkening of Valinor.