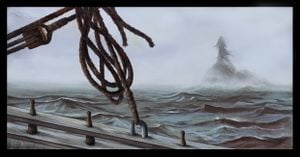 The Curse of Mandos by Lourdes Velez

The Doom of Mandos, also called the Doom of the Noldor, the Curse of Mandos, and the Prophecy of the North, was the judgement of the Valar (believed to have been spoken personally by Mandos) pronounced on the Noldorin Elves who carried out the Kinslaying at Alqualondë in Eldamar. It was given to the Noldor in the lands of Araman north of Valinor as a warning of the woe that would come upon them if they continued in their rebellion against the Valar and did not repent of their killing of the innocent Falmarin Elves.

The Doom was as follows:

Tears unnumbered ye shall shed; and the Valar will fence Valinor against you, and shut you out, so that not even the echo of your lamentation shall pass over the mountains. On the House of Fëanor the wrath of the Valar lieth from the West unto the uttermost East, and upon all that will follow them it shall be laid also. Their Oath shall drive them, and yet betray them, and ever snatch away the very treasures that they have sworn to pursue. To evil end shall all things turn that they begin well; and by treason of kin unto kin, and the fear of treason, shall this come to pass. The Dispossessed shall they be for ever.
Ye have spilled the blood of your kindred unrighteously and have stained the land of Aman. For blood ye shall render blood, and beyond Aman ye shall dwell in Death's shadow. For though Eru appointed to you to die not in Eä, and no sickness may assail you, yet slain ye may be, and slain ye shall be: by weapon and by torment and by grief; and your houseless spirits shall come then to Mandos. There long shall ye abide and yearn for your bodies, and find little pity though all whom ye have slain should entreat for you. And those that endure in Middle-earth and come not to Mandos shall grow weary of the world as with a great burden, and shall wane, and become as shadows of regret before the younger race that cometh after. The Valar have spoken.
—Quenta Silmarillion, "Of the Flight of the Noldor" 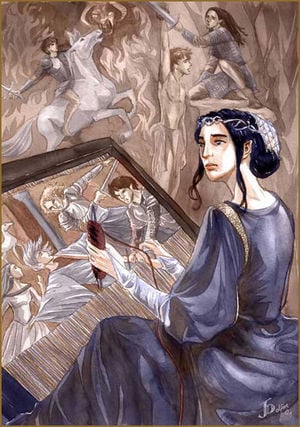 A Tapestry of Sorrows by Jenny Dolfen

The pronouncement of this Doom was the immediate cause for the full repentance of Finarfin (already reluctant to proceed) and his followers, and their return to Tirion. There they asked and received the forgiveness of the Valar.[1]

However, the majority of the Noldor (as well as the Vanya Elenwë who accompanied her Noldorin spouse) continued on their way to Beleriand to fight Morgoth,[1] and the disastrous wars they waged there fulfilled the prophetic Doom.[2][3]

Most would not survive, and forgiveness and pardon for the exiles did not come until the War of Wrath that ended the First Age. Even then, some few chose not to return, but to remain in Middle-earth.[4]

In The Book of Lost Tales, an early version of the Doom of Mandos is spoken by a servant of Vefántur, who saw the exiled Noldoli as they journeyed towards the Helkaraksë. He foretold of evil things to come, and ended with the words "Great is the fall of Gondolin". This was remembered by the Noldoli as the Prophecies of Amnos, named for the place in which the words were spoken.[5] It is to be noted this was a foretelling rather than a curse, and was not spoken by Vefántur (Mandos) himself.

In the tale of The Fall of Gondolin, Turgon spoke the same words, "Great is the fall of Gondolin", which were recognised as "the words of Amnon the prophet of old". A few jottings by Tolkien in a notebook also reference a Prophecy of Amnon, but these are unclear as to whether Amnon is a person or a place.[6]