Mount Gundabad was a mountain adjacent to the northern reaches of the Misty Mountains. It was revered by the Dwarves but usually occupied by Orcs.

From the northern part of the Vales of Anduin, Mount Gundabad appeared to be the northern endpoint of the Misty Mountains and the western endpoint of the Grey Mountains, although slightly separated from both ranges.[1] In actuality, the Misty Mountains continued past Mount Gundabad in a north-westerly direction (this extension was known as the Mountains of Angmar). In all maps the mountain was shown as having three conjoined peaks. Bordering Forodwaith to the north, the mountain undoubtedly had a cold climate.[2]

According to the Dwarves, Durin the Deathless, eldest of the Fathers of the Dwarves, awoke at Mount Gundabad shortly after the Awakening of the Elves. From that time forward, the mountain was revered by the Dwarves.[3] However, since Durin awoke alone he did not stay at the mountain; he walked southward until he founded Khazad-dûm.[4] In the early ages, Mount Gundabad did serve as a place of assembly for delegations of Dwarves, yet there is no mention of any making permanent residence there.[3]

In S.A. 1695, Sauron invaded Eriador. In 1697, he conquered Eregion[5] and would have overwhelmed Elrond, leading refugees northward, but he was attacked in the rear by forces sent from Khazad-dûm. Sauron drove the Dwarves back but could not breach the Doors of Durin. Frustrated, he commanded the Orcs to harry the Dwarves wherever they could be found.[6] Soon thereafter, came the First Sacking of Gundabad, followed by a long occupation by Orcs.[3]

Around the year T.A. 1300, the realm of Angmar arose.[7] Its lands lay on both sides of the Misty Mountains[8] so Mount Gundabad was part of its domains. Although Angmar was destroyed in 1975[7], the last remnants of its people east of the mountains were driven away[9] in 1977.[7] Gundabad itself remained populated with Orcs.

After the death of King Thrór in 2790, the Dwarves gathered for vengeance. The War of the Dwarves and Orcs began in 2793[7] and the Second Sacking of Gundabad occurred.[10] Although it is likely that the Dwarves cleared the mountain of all Orcs, the Orcs returned and Mount Gundabad again served as their capital in the North.[11]

In 2941[7], Thorin Oakenshield, Gandalf, several Dwarves, and Bilbo Baggins, entered the Misty Mountains. While in the mountains, the Great Goblin was killed and the party escaped. Furious, the Orcs gathered at Mount Gundabad under the command of Bolg to seek revenge. Hearing of the death of Smaug, they marched on the Lonely Mountain.[11] However, the Orcs lost the Battle of Five Armies and three parts of their numbers.[12] Orcs still lived at Mount Gundabad by the end of the Third Age but in a very reduced state.

Gundabad is said to be a "in origin a Khuzdul name". Its meaning, however, is unknown.[13]

A recogniseable element is Khuzdul gundu, meaning "underground hall", but it is not known if this word is indeed part of the name Gundabad.[14]

Gundabad in The Hobbit film series

On their way to Rivendell, Radagast and Gandalf are pursued by Azog's Orcs and swift Wargs of Gundabad, according to Gandalf.

Gundabad is a large fortress of the Misty Mountains, housing a large number of Orcs and bats. Legolas and Tauriel travel there and discover the second orc army heading for Erebor. Legolas remarks that their people fought a battle there in another Age and his mother was killed at that place. 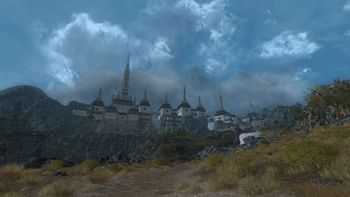 Gundabad in The Lord of the Rings Online

Gundabad is translated as "Mountain-home". The region lying before the Gates of Gundabad, between Langwell and Greylin, is known as "Elderslade". Months after the fall of Sauron, Elderslade is the site of the "War of Three Peaks", in which Prince Durin, son of Thorin Stonehelm, leads an army of Dwarves to reclaim Gundabad from the forces of "Gorgar the Ruthless", son of Bolg.

Within the mountain, the "Delvings of Gundabad" are divided into five areas. "Máttugard" is the main citadel and site of Gundabad's throne. "Deepscrave" is a tall and deep cavern that once housed the common folk of Gundabad, now occupied by Orcs. The gem-studded "Pit of Stone-jaws" is home to Gundabad's tombs. In a basalt cavern at the heart of the mountain lies "Gloomingtarn", called in Khuzdul "Durthuzâram", the lake upon which Durin the Deathless awoke. The overgrown gardens of "Clovengap" are exposed to the sky through a rift in the mountainside.

To the north of Gundabad lies "Câr Bronach", the easternmost extent of Angmar. The western slopes of the mountain are called the "Welkin-lofts", and are the site of several dwarven structures, including a meeting place for the Seven Houses.

According to Longbeard legend, when he relocated his kingdom to Khazad-dûm, Durin I named his best friend, "Mótsog", the first Lord of Gundabad. He came to regret that decision, for Mótsog betrayed Durin and led his "Greymaul" followers in an uprising against their fellow Longbeards.