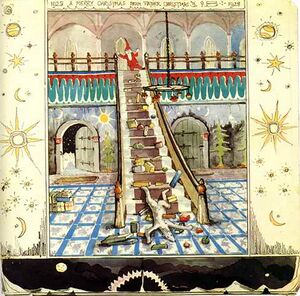 Polar Bear had fallen from top to bottom onto his nose by J.R.R. Tolkien

The North Polar Bear (also, the Great Polar Bear[1]) was a polar bear who lived with Father Christmas at the North Pole. He is especially noted for being "helpful" and for causing a lot of accidents. His real name was Karhu (Finnish for 'bear'). He had two nephews, Paksu and Valkotukka, and the Great Bear (Big Dipper) was his cousin. The Polar Bear was, according to Father Christmas, magical, and he sometimes wrote comments on Father Christmas' letters.[2]

The North Polar Bear started out as very foolish, unrepentant, and temperamental. When he broke the North Pole and the house while climbing the North Pole (see below) Father Christmas was angry with him and so the Polar Bear refused to help with the presents. He was most unrepentant when he turned on the Northern Lights, causing a huge bang and lots of inconvenience, and when he caused lists to be blown about and mixed up, he laughed. The Polar Bear also put his nose against the North Pole on a cold day - the result can be imagined. He could be hurt easily - he ran away in shame after he fell down some steps. The Polar Bear was very lazy, leading to accidents, including an explosion of crackers.

Polar Bear sometimes wrote a letter as well as Father Christmas. In these, he attributed his mistakes in spelling due to the fact that Arktik is the language spoken at the North Pole, instead of English.

The Polar Bear caused many accidents. The more notable include falling through the roof of Father Christmas' old house, losing his way in the caves, and setting himself alight while decorating a Christmas tree. He has also fallen down steps, pushed the Snowman over a cliff, fallen asleep during a bath causing an overflow and the ruin of many Christmas presents, eaten nuts whole, and upturned a boat. These accidents were so frequent that Father Christmas wrote "I should hardly feel it was Christmas if he didn't do something ridiculous."