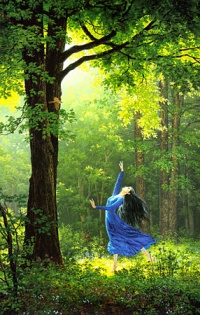 This Canto starts out with the tale of Thingol and Melian. Then it gives a description of Lúthien their daughter, and tells how Beren watched in amazement. Dairon warns Lúthien, and she hides, but Beren touches her arm by accident. Again Beren searches, and months later catches her again, naming her Tinúviel. Below is recounted the second meeting.

This canto, in contrast to the previous one, shows peace and hope, and the beauty of Doriath.

There after but an hour, him seems,


he finds her where she lies and dreams
pale Melian with her dark hair
upon a bed of leaves. Beware!
there slumber and a sleep is twined!
He touched her tresses and his mind
was drowned in the forgetful deep

This canto also includes the short paragraph about the minstrels: Tinfang Gelion, Maglor, and Dairon, the first of which has only this place laid aside for him in all the known writings of Tolkien.


enchants on summer nights of June
and kindles the pale firstling star;
and he who harps upon the far
forgotten beaches and dark shores
where western foam for ever roars
Maglor whose voice is like the sea;

Beren's mixture of sorrow and bliss and the fleeing of Lúthien is shown, and at the last when he catches her in the vivid description of her dancing it culumnates.


His voice such love and longing filled
one moment stood she, fear was stilled;
one moment only; like a flame
he leaped towards her as she stayed

Then is a paragraph unlike the rest of the Lay, unless it were Thingol's thoughts of pity on Lúthien; a sort of cry from the poet to the one he writes about, asking her why she took her doom, and left elven immortality.


more fair than any child of Men;
O! loveliest maid of Elfinesse

On a final note, she slips away "just at the breaking of the day".