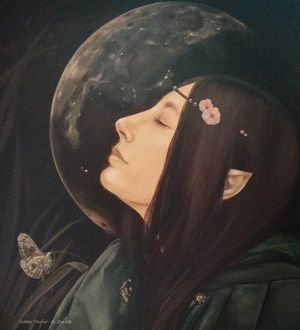 "...thousands of dark-grey and black moths, some nearly as big as your hand"
― The Hobbit, "Flies and Spiders"

Moths were nocturnal insects of a kind closely related to butterflies. Thorin and Company saw them fluttering about at nightfall when they were trying to find the route to Rivendell.[1] Curiously, they are also mentioned as dwelling in Mirkwood, where the moths were black or dark grey, and grew to a huge size.[2]

In Tolkien's early conceptions of Elvish languages, the words for "moth" are malo (pl. malwi) in Qenya,[3] and fufril in Gnomish.[4]

In The Tale of Tinúviel, white moths flittered about the head of the dancing Tinúviel, as the evening fell. It is told that Tinúviel "being a fairy minded them not as many of the children of Men do, although she loved not beetles, and spiders will none of the Eldar touch because of Ungweliantë".[5]