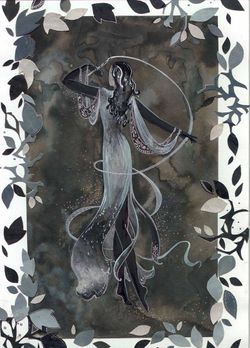 "It was often said (in other families) that long ago one of the Took ancestors must have taken a fairy wife."
― The Hobbit, "An Unexpected Party"

Fairies were creatures of Hobbit legend, only mentioned fleetingly.[1]

In early writings of the legendarium, Fairies was a name for the Elves.[2][3][4]

J.R.R. Tolkien's concept of Faërie uses a deliberate variant spelling of fairy. While both spellings derive from Middle English faie ("possessing magical powers"), the name fairy carries connotations of 'prettiness'. Tolkien wanted to distance himself from this modern sense, and by using Faërie (variants included Faery and Fayery) he sought "connotations older and considerably darker".[5]