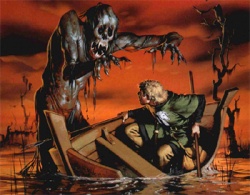 Mewlips were a legendary race of evil creatures only mentioned in Hobbit verse. The creatures were likely fictitious, although they could have been inspired by Orcs.[1]

Living beyond the Merlock Mountains and the marsh of Tode, they are said to have fed on passers-by, collecting their bones in a sack.[2]

In The Hobbit, Bilbo Baggins learned that the Long Marshes had grown wider, consuming paths and lost people.[3] In plot notes that J.R.R. Tolkien made while writing the story the raftsmen told tales of disappearing rafts, men, and beasts;[4] John D. Rateliff suggests that the more ominous line in the notes may indicate that Tolkien had some unpleasantness in mind had Thorin and Company gotten into the marshes - perhaps meeting the Mewlips.[5]

Mewlips, described and given statistics in various supplements, are portrayed as undead beings living in swamps and marshes. The race is conceived as having been created by Morgoth in the Elder Days.[6][7]