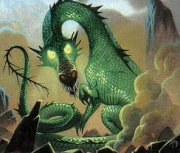 Spark-dragons were a breed of dragons of whom all that is known is from the nomenclature by the Eldar.[1] No story tells of their appearance in the history of Arda, but one can assume that somehow they radiated light (and therefore perhaps were related to, or were another name for, the great glow-worms).

In Quenya, the name of the creature is fealóke, consisting of fea ("spark"; from root PHAY-, "radiate, send out rays of light") and lóke ("dragon"; from root LOK-, "great serpent, dragon").[1]

Light-drakes (Quenya Kalalóki) are rare, wingless Dragons. They prefer to fight with their tails, which hold an electrically charged fluid that delivers "a 'sting' analogous to the impact of a lightning bolt".[2]

"Light-drake" is a Creature of the Drake-kind, able to inflict two strikes.