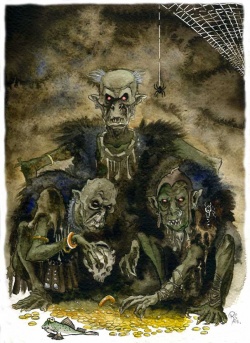 The Mewlips by Richard Svensson.

The Mewlips is a nonsensical but eerie hobbit poem, appearing in the work The Adventures of Tom Bombadil by J.R.R. Tolkien. It concerns the Mewlips, an imaginary race of evil creatures. The poem describes the long and lonely road needed to reach the Mewlips, travelling beyond the Merlock Mountains, and through the marsh of Tode and the wood of "hanging trees and Gallows-Weed". None of these places appear on any of the maps, but they might be references to the Misty Mountains and Mirkwood; the Mewlips themselves must be a fictitious version of the Orcs.[1]

There is also a mention, in the same poem, of gorcrows, creatures who croak in their sleep; nothing more is said of them.[2]

The Shadows where the Mewlips dwell
Are dark and wet as ink,
And slow and softly rings their bell,
As in the slime you sink.

You sink into the slime, who dare
To knock upon their door,
While down the grinning gargoyles stare
And noisome waters pour.

Beside the rotting river-strand
The drooping willows weep,
And gloomily the gorcrows stand
Croaking in their sleep.

Over the Merlock Mountains a long and weary way,
In a mouldy valley where the trees are grey,
By a dark pool's borders without wind or tide,
Moonless and sunless, the Mewlips hide.

The cellars where the Mewlips sit
Are deep and dank and cold
With single sickly candle lit;
And there they count their gold.

Their walls are wet, their ceilings drip;
Their feet upon the floor
Go softly with a squish-flap-flip,
As they sidle to the door.

They peep out slyly; through a crack
Their feeling fingers creep,
And when they've finished, in a sack
Your bones they take to keep.

Beyond the Merlock Mountains, a long and lonely road,
Through the spider-shadows and the marsh of Tode,
And through the wood of hanging trees and gallows-weed,
You go to find the Mewlips - and the Mewlips feed.[2]

The poem is the only one in the collection of The Adventures of Tom Bombadil that is not given a background or attribution or a reference in the book's Preface. Placed in the middle of the collection (ninth out of sixteen), it seems to not fit in a category of the other poems (fairy-like, whimsical, bestiary or emotional).[4]

In 2008, Richard Svensson released a stop-animation version of "The Mewlips", with accompanying music by Colin Rudd. {{#ev: youtube|w6ntMbUEjf0}}

In 2014, Dutch black metal band Walpurgisnacht released their musical interpretation of "The Mewlips", with the poem being the lyrics to their music. {{#ev: youtube|LoJPMmWfhqY}}