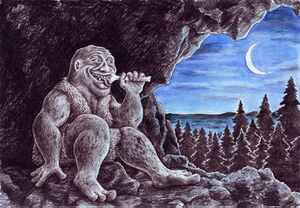 "Troll sat alone on his seat of stone" by Matěj Čadil

The Stone Troll is a poem composed by Samwise Gamgee and recorded in the Red Book of Westmarch.[1] Sam recited this poem when Aragorn and the hobbits were resting[2] in the shade of the trolls who had been turned into stone during Bilbo Baggins' adventure with the Dwarves.[3]

'My lad,' said Troll, 'this bone I stole.
But what be bones that lie in a hole?
Thy nuncle was dead as a lump o' lead,
Afore I found his shinbone.
Tinbone! Thinbone!
He can spare a share for a poor old troll,
For he don't need his shinbone.'

But just as he thought his dinner was caught,
He found his hands had hold of naught.
Before he could mind, Tom slipped behind
And gave him the boot to larn him.
Warn him! Darn him!
A bump o' the boot on the seat, Tom thought,
Would be the way to larn him.

But harder than stone is the flesh and bone
Of a troll that sits in the hills alone.
As well set your boot to the mountain's root,
For the seat of a troll don't feel it.
Peel it! Heal it!
Old Troll laughed, when he heard Tom groan,
And he knew his toes could feel it.