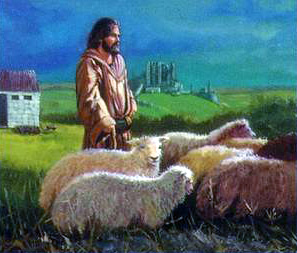 Artwork by Brad Williams for MECCG

Sheep were woolly grazing animals. The Folk of Marach migrated to Beleriand with flocks of sheep and goats.[1] They were especially common in the Númenórean region of Emerië,[2] and (in Middle-earth) on the Barrow-downs and in the Vales of Anduin.

In Tolkien's early conceptions of Elvish languages, the words for "sheep" are moa in Qenya,[5] and moth (pl. mothrim or mothin) in Gnomish.[6]

Sheep are found on the fields around Bagshot Row.

Sheep are found throughout the Shire and Bree-land.

Though the dwarves do not use horses and occassionally ride bought or rented ponies, they are depicted as keeping a fictional species of large sheep as a form of dwarven livestock. These sheep are depicted briefly in the prologue of the first film, An Unexpected Journey, as part of the refugee caravans of dwarves exiled from Erebor, and then much more prominently in The Battle of the Five Armies During the titular battle, specially trained sheep are ridden by some of the dwarven sodiers and warriors from the Iron Hills, used as an unusual form of cavalry capable of fighting in mountainous terrain. These sheep are referred to as "war rams" (albeit Dáin Ironfoot also calls them "goats", perhaps colloquially). Thorin Oakenshield borrows a war ram for a hasty gallop towards Ravenhill.[9][10]