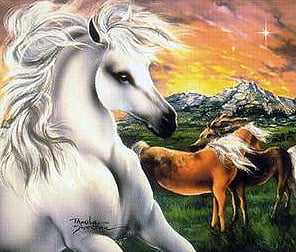 Adûnaic also had its own terms for a horse, specifically karab in "common" gender singular ("horse", as a species/creature), the masculine singular karbû ("male horse", "stallion"), the feminine singular karbî ("female horse", "mare"), and the plural karîb ("horses"). [16] [17] [18]