Arod was a light horse of Rohan. He bore a Knight of Rohan in Éomer's éored that engaged the Orcs outside Fangorn. His rider was lost during the skirmish, but Arod himself survived and remained with the rest of the éored on their way back. In the Wold, Éomer gave him to Legolas.[1]

Arod served his new rider faithfully, and for much of this time, Arod carried also Legolas's friend Gimli. At the Paths of the Dead Legolas spoke Elvish to calm the beast so that he would enter the Dark Door.[2] Presumably he bore Legolas on his way throughout the War of the Ring and during the Battle of the Pelennor Fields.[3] Legolas and Gimli rode upon Arod with the rest of their company to take Théoden's body from the Hallows in Minas Tirith, to rest in Edoras.[4]

By coincidence, there is also a Sindarin word arod, meaning "noble".[5] 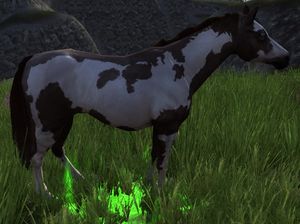 Arod in The Lord of the Rings Online

In The Lord of the Rings: The Two Towers and The Return of the King, Arod is played by a white stallion named Percy. According to Orlando Bloom, it was the friendliest horse on the set.

Arod and Hasufel, led by Shadowfax, appear in a mission in which the player has to stop Mordor orcs from stealing Black Horses of Rohan.