"Noro lim, noro lim, Asfaloth!"
― Glorfindel in The Fellowship of the Ring, "Flight to the Ford"

Asfaloth was the white horse of Glorfindel.

Asfaloth was ridden by Glorfindel during the search for Aragorn and the Hobbits on their way to Rivendell. After he found them and the Black Riders attacked, Glorfindel dismounted and placed Frodo Baggins (the Ring-bearer) on its back, then ordered it forward to safety at the Ford of Bruinen. Asfaloth was a remarkably fast horse, outpacing the black steeds of the Black Riders, even so that it reached the Fords first.[1]

In answer to a question from Rhona Beare in 1958, Tolkien admitted that Glorfindel would not have used a bridle and bit when riding Asfaloth; instead he would only have used an ornamental headstall with a plume, jewels, and small bells. He assured her that he would change bridle and bit to headstall in future editions, a change that was made.[3] 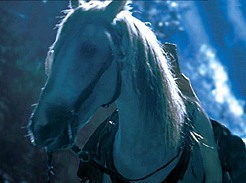 Asfaloth is the horse of Arwen, having taken over Glorfindel's role. Three white Andalusians were used: Florian, the hero horse; Hero, used for high speed chases; and Odie, which was used for scenes in which Arwen was unhorsed.[5] Jane Abbott[6] and Sonia Duncan[7] were Liv Tyler's riding doubles.

Asfaloth is the horse of Glorfindel. He sends it to carry Frodo to Rivendell.