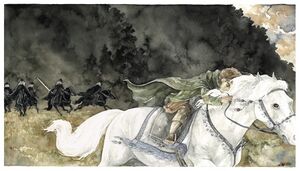 Escaping from the Black Riders by Anke Eißmann

Noro lim, noro lim, Asfaloth! is a Sindarin phrase cried by Glorfindel to Asfaloth while helping Frodo Baggins to escape from the Black Riders. Glorfindel had halted from his horse, telling Frodo to run, but as the hobbit was relucting, Glorfindel commanded the horse in the elf-tongue, making Asfaloth run at once right before the Riders appeared.[1]