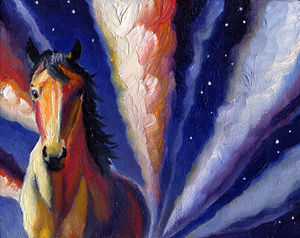 The Mearas was the name given by the Rohirrim in Rohanese for a race of exceptional horses.[1]

The Mearas were strong, wild, and intelligent. They would bear no man but the kings or princes of the Mark (with Gandalf as a notable exception). Their lifespan was as long as men.[note 1][2]

According to tradition, the ancestors of the Mearas were brought from the West by Béma.[2] The horses of the Vales of Anduin were special. During the Angmar War, the Host of the West included noble Northmen riders, and when they landed at Lindon their horses were especially praised.[3]

In T.A. 2501[note 2] Léod of the Éothéod captured and tried to tame the first of the Mearas, only to be killed when he tried to mount it. His son, Eorl, however managed to ride it and named it Felaróf. Eorl came with this horse south to Rohan and the Mearas were his descendants. Felaróf was said to be able to understand men's speech.[2]

In 3018,[4] the greatest of the Mearas, Shadowfax, consented to be ridden by Gandalf.[1] Gandalf rode Shadowfax throughout the War of the Ring.[5]

The word Mearas comes from Old English mēaras, simply meaning "horses". Its singular form would be mearh or marh. Robert Foster in his The Complete Guide to Middle-earth incorrectly displays the singular as Meara.

The root marh can be seen in the names of the Northmen Marhwini and Marhari (which are actually Gothic)[6] as well as Marcho.