Hunting of the Wolf 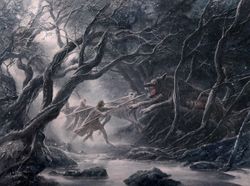 The Hunting of the Wolf by Alan Lee

The Hunting of the Wolf is the confrontation between a party of Iathrim and Carcharoth, forming the final adventure of the Quest of the Silmaril.

At the gates of Angband, the mighty wolf Carcharoth had bitten Beren's hand from his wrist, and with it the Silmaril it held. The Silmaril was a hallowed jewel, and burned the innards of the evil monster. In searing pain, the wolf blindly chased through Beleriand and, breaking the Girdle of Melian, roamed madly through the lands of Doriath. 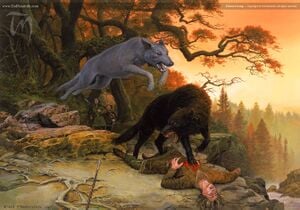 King Thingol set out to hunt the wolf with the greatest of his warriors. With him went Mablung of the Heavy Hand, Beleg Cúthalion, Beren Erchamion and Huan the Hound of Valinor. They found Carcharoth under the eaves of Neldoreth, drinking beneath a waterfall of the River Esgalduin. Eventually, after a mighty battle, Huan slew Carcharoth, but both he and Beren were mortally wounded.

The Silmaril was recovered from the wolf's belly and given to Beren, who gave it to Thingol in turn before dying, fulfilling thus the Quest. The survivors carried the bodies and the jewel back to Menegroth.[1]

Later, the jewel was fastened in the Nauglamír,[2] which Eärendil would bear as he sailed to Aman and that, according to legend, became the Evening and the Morning Star.[3]