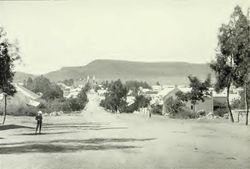 Bloemfontein is the city where J.R.R. Tolkien was born in 1892. Now part of the nation of South Africa, at the time that the Tolkien family lived there it was the capital of the independent Orange Free State. Tolkien, his mother, and his brother moved back to England in 1895 while his father, Arthur Tolkien, remained because of business until he died in 1896. Although the name of the city means "fountain of flowers" in Dutch and is nicknamed Stad van die Rose (English: "City of the Roses") in Afrikaans, Tolkien’s first childhood memories were of a hot, parched country with a blazing sun, drawn curtains, and a drooping eucalyptus.[1]

Bloemfontein was also the seat of the now defunct South Africa Tolkien Society. This Tolkien Society published a touristic walking tour of Bloemfontein in the early 2000s.[2][3] The Bank of Africa building where Arthur Reuel Tolkien worked no longer exists and a commemorative plaque on the new building was stolen, later recovered and then stored in municipal archives. The Anglican Cathedral of Bloemfontein with the baptism font still stands today as do many of the sandstone buildings of the Republic of the Orange Free State period from the same period as J.R.R. Tolkien's early years. 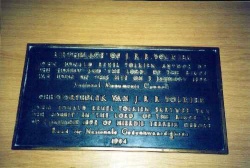