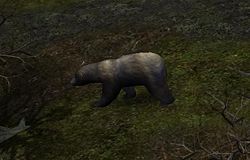 A bear in Mirkwood in The Lord of the Rings: The Battle for Middle-earth

"I should say there were little bears, large bears, ordinary bears, and gigantic big bears, all dancing outside from dark to nearly dawn."
― Gandalf[1]

Bears were large and ferocious animals, notorious for their love of honey.[2]

Bears lived in the Misty Mountains for some time, though by the late Third Age, their number had diminished. Gandalf told Bilbo that giants had taken up their homes in that mountain range. One of the alleged origins of Beorn, the skin changer, was that he had descended from them.[1]

Early Noldorin had two words for bear: brôg[3] and megli (with the variation meglivorn "Black bear")[4] In Sindarin, only the word graw is attested,[5] though Didier Willis also suggested the "updated" word Medli.[6] A Quenya word for "bear" is given as morco, sharing a Root with brôg.[3] A variant Quenya name for "bear" is given as morokō (and mor(o)kē, "she-bear").[7]

In the earliest outlines of The Fall of Gondolin, Tuor was clad in the skins of bears.[8] The sinews of bears were also used to make bowstring[9] and harp strings.[8]

Bears play a significantly bigger role in other stories, most notably Mr. Bliss and The Father Christmas Letters.

Beorn appears only in the shape of a black bear.[12]

2006: The Lord of the Rings: The Battle for Middle-earth:

Bears appear as wildlife in the map "Mirkwood".[13]

Bears are found in many places of Middle-earth and range in size of large dog to the size of a small elephant. They are typically not aggressive, but will fight if the player threatens them. Players that are lore-masters are able to use a bear as a combat pet.

Beorn appears in the form of brown bear, both in the second and the third film.