Quickbeam, or in Sindarin Bregalad, was one of the younger Ents of Fangorn Forest belonging to the people of Skinbark. His name was given because of uncharacteristic hastiness.

The rowan-trees in his keeping (among them Carnimírië, Lassemista, and Orofarnë) suffered greatly at the hands of Saruman's Orcs, so he was the first ent to make his mind up at the Entmoot. He sheltered, in his home, the two hobbits, Merry, and Pippin while the other ents made up their minds at the entmoot. He played a great part in the Ents' resulting attack on Isengard.

The name Quickbeam was given to him because he was hasty for an Ent.[1] His Sindarin name, Bregalad, means "quick (lively) tree", derived from *breg- having to do with "violence, suddenness" and galadh, "tree".[2]

Quickbeam and Quicken are actual English names of the "rowan" or "mountain ash". It was not coincidental that "rowan" is mentioned in Quickbeam's song.[3] 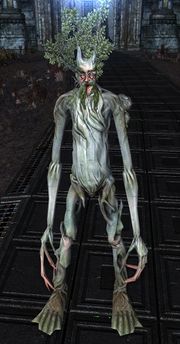 Quickbeam in The Lord of the Rings Online

A card in Decipher's The Lord of the Rings Trading Card Game identifies one of the Ents at Isengard as Quickbeam.

Quickbeam is first met in a grove in the far eastern side of Nan Curunír, attempting to put an end to Saruman's attacks on the forest on his own. Shortly after the Ents take Isengard, Quickbeam returns to Derndingle, where he gives the player tasks to pacify the forest that had quickly become wild in the absence of the Ents.

Retrieved from "http://tolkiengateway.net/wiki/Quickbeam"
Categories: Characters in The Lord of the Rings | Ents | Third Age characters