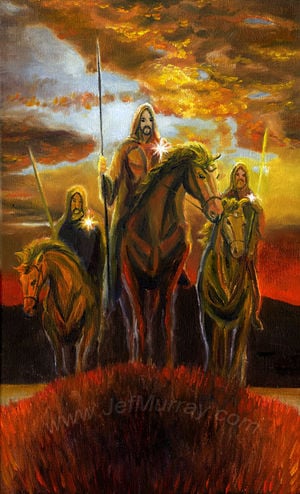 Spurred only by the strength of Aragorn's will, the Company with Legolas and Gimli entered the dark path at the dawn of the next day.[2] At midnight[source?] Aragorn summoned the Dead at a clearing to follow him to the Stone of Erech. After creeping in the darkness for what seemed like ages, the Company emerged from the Paths and rode quickly through the mountain fields with the Dead behind. They followed the river Morthond briefly to Erech. The inhabitants of the surrounding countryside fled in fear, calling Aragorn the "King of the Dead". 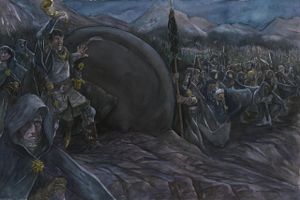 Arriving at the large, black Stone of Erech at midnight,[2] the legion of the Oathbreakers announced their allegiance to Aragorn. Aragorn unfurled a black flag and pronounced himself the Heir of Isildur. The Company rode on to Anduin.[1]

On 9 March[2] they led the Oathbreakers over Tarlang's Neck, across the Ciril and Ethring on the way to Pelargir and reached Calembel.[1] A day later they passed across the river Ringló.[2]

On 11 March they were in Lamedon, and the Dead drove forth the assailants from Linhir, but the staunch defenders fled as well, except for Angbor. Aragorn bade him gather his folk and follow them. After Linhir they reached Lebennin.[2] The Corsairs of Umbar were beaten back to Pelargir the next day. 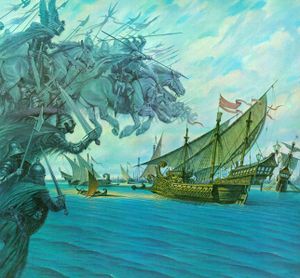 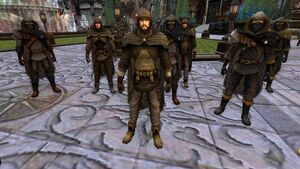 The Grey Company in The Lord of the Rings Online, showing the variety in their outfits

The Grey Company plays a major role in the game beginning with the Volume III: Allies of the King. Other than Halbarad and the Sons of Elrond, sixty-two other Rangers and the player form the Grey Company as they journey south. Their path through Dunland is beset by many dangers, as many Rangers are killed and some are forced to either turn back or stay behind until only thirty remain by the time they finally meet with Aragorn. Other than Halbarad, seven other Rangers are killed in the Battle of the Pelennor Fields while the rest join the Host of the West on the march towards the Black Gate. Only one of the Rangers falls during the battle and all of the survivors attend the wedding of Aragorn and Arwen after which they finally part ways. Some decide to return north to Eriador while others choose to remain in Gondor and serve King Elessar alongside Rangers of Ithilien against the dangers still remaining in Mordor.