Erech was a hill in Gondor situated at the mouth of the Blackroot Vale, far to the west of Minas Tirith.[1] It lay near to the southern entrance to the Paths of the Dead. Upon the summit stood a smooth black globe, the Stone of Erech.

In the Second Age, Isildur brought with him the stone as a symbol of his lineage. The Stone of Erech was a great black stone, spherical in shape and roughly six feet in diameter. He set it upon the hill of Erech and made the local hill tribes swear an oath of loyalty on the stone. It was there that the King of the Dead swore allegiance to Isildur's cause at the time of the Last Alliance. Because he failed to fulfil his oath, the Oathbreakers haunted the hills until they made good their promise. 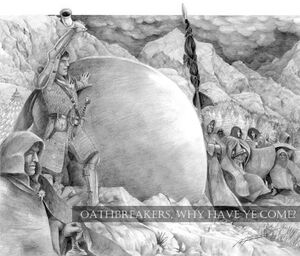 Oathbreakers, Why Have Ye Come? by Abe Papakhian.

The Stone became a mysterious and eerie place, shunned by the people of the valley, who claimed it had fallen from the sky, and was haunted by restless spirits. The area was completely abandoned by the end of the Third Age. During the time of King Arvedui of Arthedain, a prophecy was made regarding the arising of the dead during the War of the Ring. In this prophecy the Stone of Erech was mentioned:

"The Dead awaken; for the hour is come for the oathbreakers: at the Stone of Erech they shall stand again and hear there a horn in the hills ringing."
― Malbeth the Seer

When the Grey Company came to Rohan, the sons of Elrond brought with them a reminder of these words from their father to Aragorn, who acted upon these words to brave the Paths of the Dead.[2]

After waiting through the long years of the Third Age, at midnight on 8 March T.A. 3019,[3] the heir of Isildur, Aragorn, came to Erech to hold the Dead to their oath again, promising that upon its fulfillment they would have peace.[2] The next day they left Erech for Calembel.[3] Indeed, on 13 March,[3] they held true to their oath and formed the Host of the Dead to help Aragorn defeat the Corsairs of Umbar at Pelargir. After the battle at Pelargir, Aragorn released them from their oath and they were allowed to rest.[4]

The name Erech, like so many names in Gondor, was of unknown Mannish pre-Númenórean origin.[5] 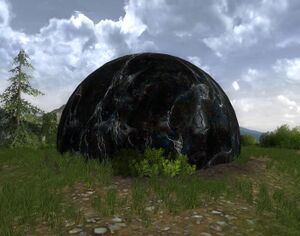 The Stone of Erech in The Lord of the Rings Online

The Stone of Erech is named Orossar and is reimagined as one of the seven Vandassari (Oath-stones in Quenya) brought from Númenor. They are the "seven stones" from the rhyme spoken by Gandalf, while the Palantíri are revealed to be the "seven stars". The stones had in them the power that made the oaths sworn in their presence more potent, and thus they were divided much like the palantíri (three to Arnor and four to Gondor) to make pacts friendship with the non-Dúnedain peoples of Middle-earth.