The Battle of Unnumbered Tears is the second chapter of The Children of Húrin.

Húrin and his brother Huor passed from Dor-lómin with a number of men from the House of Hador to Eithel Sirion upon the west of the barren plain, Anfauglith. Gathered there was the host of Fingon, hidden from the eyes of Morgoth; and all were jubilant when they were joined by a force from hidden Gondolin led by Turgon, Fingon's brother.

The host of Fingon were to await a beacon signal from Maedhros before they joined the battle so that they might outflank the enemy forces, but Morgoth sent a force to come upon Fingon's and keep the armies divided. The horde led by a Captain of Morgoth could only goad Fingon's force into battle by killing the elf Gelmir whom they had captured at the Dagor Bragollach. Gelmir's brother, Gwindor, was present with Fingon and was so enraged that he initiated the charge and Fingon's force entered the battle earlier than planned. 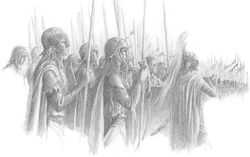 The Battle of Unnumbered Tears by Alan Lee

Such was the force of this initial attack that they reached the very doors of Angband; but Gwindor was captured. Fingon was then beaten back across the plain by the main host of Morgoth's forces that issued from many secret tunnels. So did the Nirnaeth Arnoediad begin.

To support his brother, Turgon brought his force into the fray, and Fingon, Húrin, Huor and Turgon met in the midst of the battle after long partings. But with the force of Maedhros routed, more Orcs led by Gothmog came upon the elves and men from the east, and they were outmatched.

Fingon fell to Gothmog, but Turgon, on the advice of Huor, retreated, guarded by the remnants of the House of Hador. There at the Fen of Serech, Huor fell, but Húrin was captured alive at great loss to the enemy; and he was dragged to Angband.

Retrieved from "http://tolkiengateway.net/wiki/The_Battle_of_Unnumbered_Tears"
Category: The Children of Húrin chapters