The Departure of Túrin

The Departure of Túrin is the fourth chapter of The Children of Húrin.

After the defeat of the House of Hador and the capture of Húrin at the Fen of Serech (of which none were aware but the enemy), Morgoth gave the land of Dor-lómin to the Easterlings, those men who had helped in the destruction of Maedhros through treachery. But they would not harm nor come near the home of Húrin, for they felt Morwen was a power in her own right and also they were afraid of the mountains within which the house was set, for they felt they were the haunt of the Elves. 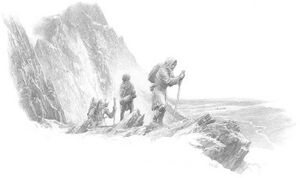 The Departure of Túrin by Alan Lee

Morwen now remembered her husband's advice "Go swiftly!" but she would not follow his wish; for she was now with child and felt she must await her husband's return. Instead she tarried, and many months passed before she sent her son, Túrin, away to Elven Doriath in Beleriand for fear of him being captured by the Easterlings and so placed in servitude.

This parting was a great sorrow to Túrin. Gethron and Grithnir, old soldiers of Húrin's house, took Túrin and they escaped by way of a secret pass over the Shadowy Mountains and came down into Beleriand and finally to Doriath, the Kingdom of Thingol and Melian with the help of Beleg the Strongbow.

The halls of Menegroth in the heart of Doriath were a wonder for young Tùrin and there Thingol took him as a foster son and granted him arms and shelter, for well renowned was the name of Húrin. Even though word was sent back to Morwen that her son was safe and that she might come to Doriath, she would not leave Dor-lómin – her newborn child, Niënor, Túrin's sister, was but an infant and she remained faithful to Húrin.

Túrin's second sorrow was when he heard that his mother was to remain in Dor-lómin; but in her stead she sent to Túrin the dragon-crested Helm of Hador, wrought by Telchar, as the heirloom of their house.