The Words of Húrin and Morgoth is the third chapter of The Children of Húrin.

No tidings of what had befallen in the Battle of Unnumbered Tears ever came to Húrin's home, Dor-lómin. 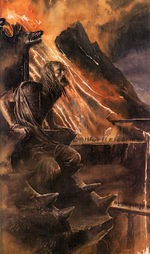 The Words of Húrin and Morgoth by Alan Lee

Húrin was brought swiftly to Morgoth in Angband, for Morgoth had heard rumour that Húrin knew of the whereabouts of Gondolin - and he desired to know the location of Turgon's city so he might have a fuller victory. But Húrin was undaunted by the power of the Enemy and would not give up his knowledge, even under slow pain and torture. So Morgoth took Húrin to Haudh-en-Nirnaeth, which was a mound freshly made of the bodies of the fallen at the very heart of the plain of Anfauglith. There again Morgoth could not master Húrin's will and so in anger he cursed Húrin and Morwen and their offspring saying, "the shadow of my thought shall lie upon them wherever they go."

Yet still Húrin would not yield the secret of Turgon and indeed challenged and mocked Morgoth's power, feeling that the Enemy did not now have the authority in Middle-earth to master the fates of Men. Thus Morgoth took Húrin and set him in a chair on a high place of Thangorodrim until such a time as he would release him. And there Morgoth granted Húrin his own sight, that he might see and hear to the ends of the land of Beleriand, for Morgoth wished that Húrin would despair to see the evil tidings that would now befall Húrin's kin.