Túrin in Doriath is the fifth chapter of The Children of Húrin.

For a little while, Túrin's time in Doriath was merry, and he befriended an elf of the wood, Nellas, who watched over him under the guidance of Melian. And even when Túrin's thoughts turned beyond merriness, Nellas would watch over him to see the malice of Morgoth grow, as much that Túrin wished for came to ruin. 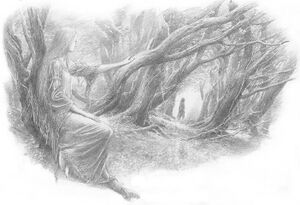 Túrin in Doriath by Alan Lee

Túrin still had the friendship of Beleg, from whom he learned much woodlore and the handling of swords, and tidings would come to him of Morwen and Niënor from Dor-lómin and how their life had become easier in the grey north. When Túrin was seventeen the messengers did not return from Dor-lómin, and tales of dark rumours spread of Morgoth's waxing power. So Túrin came before Thingol and asked his leave to free his mother from the north, to which the Elven King gave counsel to remain and guard the marches of Doriath with his sword and the ancient Dragon-helm.

Túrin remained in Doriath and, with Beleg, made a name dreaded by the Orcs. For three years he fought until one summer he returned to Menegroth. There he was met by Saeros, counsel to the King, who had ever been an adversary of Túrin for he thought Men lowly. Saeros made light of Túrin's deeds and said of the women of Dor-lómin "they run like deer only in their hair." This enraged Túrin and he tossed a cup at Saeros, marring his face.

Saeros followed Túrin the next morning and came upon him in the wild to kill him, but Túrin bested him and made him run through the wood naked. Soon many Elves witnessed the chase but Saeros in his terror leapt a gorge and slipped, falling to his death, and Túrin was asked to come to justice in Menegroth. He refused, saying "I will not seek the King Thingol's pardon" for he felt guiltless and so left Doriath at once.

Thingol, in coming to his judgement, heard even Nellas' testament – for she had seen Saeros leap at Túrin to kill him, and Túrin was pardoned and seen as innocent. Yet the Man had departed and Beleg asked to search out his friend in the wild, but only if he could choose a sword from the King's armoury. He chose the dark sword Anglachel, a choice Melian thought short sighted, and sought Túrin across Beleriand.