The Return of Túrin to Dor-lómin is the twelfth chapter of The Children of Húrin.

In the depths of winter, Túrin came hooded and silent to the land of Dor-lómin to find his childhood stead empty and dark. Spent and weary, Túrin begged for shelter at the servant halls in the house of Brodda, who was now the Easterling Lord of Dor-lómin. Here Túrin met with Sador, who was his childhood friend and mentor - he told of how Morwen and Nienor had left secretly over the passes of Ered Wethrin and so to Beleriand. To the Lady Aerin, kinswoman of Húrin, Sador directed Túrin – she was against her will the wife of Brodda; and Túrin came to both Brodda and Aerin in the great hall of the house. 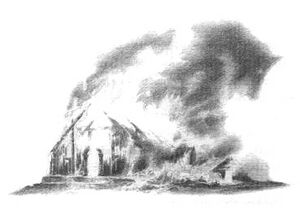 There Túrin challenged Brodda and drew forth Anglachel putting its bitter edge it to the throat of the Easterling; he asked Aerin to tell all she knew of Morwen. She told of Brodda's dark oppression of Morwen and her house, so much so that she had fled five seasons ago, as the lands to the south were held open and free by the prowess of the Blacksword. And Túrin laughed as he held that very sword to Brodda's throat.

Then Brodda was killed as Túrin threw him and his neck was broken, and the thralls of the house arose and all the Easterlings were killed. After the rage, Aerin begged Túrin to leave in haste, for more of the Incomers, that were Brodda's kin, would soon come; but Aerin herself would not go forth with the rebels, for she remained in the hall and burned it as Túrin had departed.

The rebels made camp through the winter in a mountain refuge, and there Túrin left them for he would search for his mother and sister.