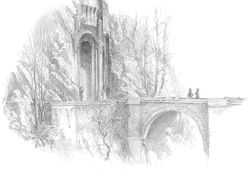 The Doors of Felagund were doors that guarded the entrance to Nargothrond, raised by its builder Finrod Felagund. They were set in the face of a cliff above the river Narog, and could be approached only by a narrow pathway across the cliff[source?], making Nargothrond secure from enemy attack.

After Felagund's death, Túrin came to dwell in Nargothrond, and he persuaded King Orodreth to change this secretive policy, and to build a great bridge before the Doors of Felagund, so that his armies could more easily pass across the Narog. This was a dire error, because it gave Morgoth's forces a means to approach the Doors. After the Battle of Tumhalad, Glaurung the Dragon came against the Doors of Felagund and destroyed them, allowing the Orcs to sack the once-mighty citadel.[1]