The Bridge of Nargothrond was a stone bridge over the river Narog at the Doors of Felagund.

Wishing to make greater war against Morgoth, the Noldor of Nargothrond forsook their secrecy and by the counsel of Túrin built a mighty bridge over the Narog. This allowed their hosts to cross the river more easily, as the battles were mainly in Talath Dirnen. Thus the hidden realm was revealed to the Enemy and his wrath.[2] 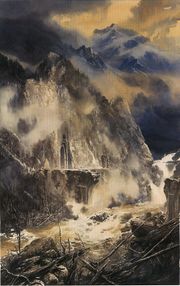 Fall of Nargothrond by Alan Lee

In the spring of F.A. 495, the Elves Gelmir and Arminas came to Nargothrond in name of Círdan, bringing news from Ulmo: Eithel Sirion had been tainted by Morgoth, and Ulmo's power was now withdrawn from the Sirion; therefore, Nargothrond should close its doors and destroy its bridge, so the Enemy would not find the hidden realm. Orodreth was troubled by this warning, but Túrin did not hearken to it, and refused to destroy the mighty bridge.[3]

In late autumn of the same year, the hosts of Nargothrond were defeated in the Battle of Tumhalad, after which Glaurung led his Orcs to Nargothrond. In that moment the bridge proved a folly, as it was too big and strong, and could not be swiftly destroyed. Therefore the guards could do nothing to stop the coming of the enemies, and the doors were destroyed and the city sacked. Thereafter all the inhabitants were killed or enslaved, and Glaurung destroyed the bridge and took the caves as his lair.[3]