The Blue Mountains (S. Ered Luin), also known as the Ered Lindon, was the mountain range at the far west of Eriador.

Sometime during the Years of the Trees two Dwarven Fathers awoke under Mount Dolmed and founded the two westernmost houses of the Dwarves (the Firebeards and Broadbeams). They subsequently built two great city-states, Nogrod and Belegost.

In the First Age, the Blue Mountains were an unbroken line separating Eriador from Beleriand. Seven rivers flowed from its western side, and the land these rivers flowed through was known as Ossiriand. Later, when the Green-elves settled there, the land was called Lindon, and the mountains sometimes referred to as the Ered Lindon. Wandering Elves would also hunt in the Blue Mountains.[3]

The Blue Mountains were ruined during the War of Wrath at the end of the First Age, and in the south central end of the range the sea broke through. The River Lhûn now flowed through the mountains to the Gulf of Lune. On the western side a small section of Lindon remained, and here the retreating Elves built the kingdom of Lindon, ruled by Ereinion Gil-galad, last High King of the Noldor.[4]

The Dwarven cities of Nogrod and Belegost were also ruined when the mountains were broken, causing most of the Dwarves to migrate east to Khazad-dûm, leaving a remnant behind. However, there remained some Dwarves on the eastern side of the Blue Mountains in days afterwards.[5]

By the Third Age, Dwarves dwelt in the east side of the Blue Mountains, especially in the parts south of the Gulf of Lhun.[6]

In T.A. 1974, fleeing the fall of Fornost Erain, Arvedui briefly hid in old dwarven mines in the far north of the Blue Mountains.[6]

It also became the new home for many of Durin's Folk who were exiled from their halls in Erebor by Smaug the Dragon who had driven them out. After the War of the Dwarves and Orcs, King Thráin II established his throne in the Southern range beyond the Shire (T.A. 2802)[7] and later his son Thorin ruled after he went missing. During Thorin's reign, many of the wandering Longbeards joined him in his halls and they became prosperous in a fashion. However, Erebor was retaken from Smaug by Thorin and company in T.A. 2941, and it can be assumed most if not all of Durin's folk relocated there.

However the dwarf-mines remained active even by the Fourth Age.[6]

Ered Luin is a Sindarin name, consisting of ered ("mountains") and luin ("blue").[8]

The Etymologies show Noldorin alternative names, Lhúnorodrim and Lhúndirien ("Blue Towers"), and also the Middle Quenya Lúnoronti,[9] which is first used in a passage of the further development of The Fall of Númenor.[10]

In the Second Age the Men of Middle-earth called Ered Luin the Western Mountains.[12]

The Blue Mountains are featured as a location of a fight between Dwarves and Drogoth. 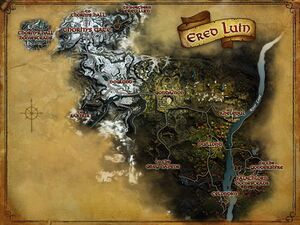 Map of Ered Luin from The Lord of the Rings Online.

The Blue Mountains appear as the game's westernmost region, Ered Luin. Ered Luin is the beginner's region for four of the game's races: Elves, High Elves, Dwarves, and "Stout-axe" dwarves. The region's storyline is based around a conflict in the early stages of the War of the Ring between the allied Elves and Longbeards and a rogue group of Dwarves called the Dourhands and their allies, the "Blue Crag" Goblins.

In addition to the dwarven capital at Thorin's Hall, Ered Luin also contains the city of "Gondamon" in the "Low Lands" of the region and the outpost of "Noglond" between the two cities. The Elven territory along the shore of the Lhûn is known as "Falathlorn", and contains the settlements "Duillond" and "Celondim". The dwarves' port city of "Kheledûl" remains under Dourhand control, as does "Sarnúr", a recently-unearthed ancient dwarven city. The fortress of "Orodost" and the blockaded pass to the Grey Havens, "Rath Teraig", are occupied by goblins.