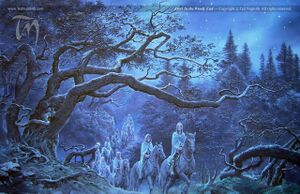 Woody End was an upland wooded region of the Eastfarthing of the Shire, lying between the Green Hill Country on the west and the Marish on the east. Its woods were the sources of the Stock-brook and the Thistle Brook. One the northern eaves of the region was Woodhall.[1]

On the evening of 24 September T.A. 3018, Frodo, Pippin, and Sam met Gildor Inglorion and his party of wandering elves in the Woody End.[2]

On 22 September T.A. 3021 the Last Riding of the Keepers of the Rings passed from the Woody End on their way to the Grey Havens, and they were joined by Frodo and Sam.[3]

According to David Salo the name means "place at one end of a wood", representing a possible Old Hobbitish Wudig Ende.[4]