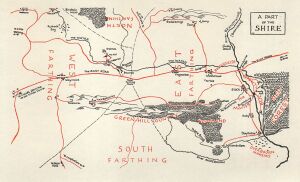 A Part of the Shire map by J.R.R. Tolkien

"A Part of the Shire" is the title of the map that immediately follows the Prologue in The Fellowship of the Ring.

Of all the maps in the published works of J.R.R. Tolkien, only Thrór's Map was made using a smaller scale, so the "Part of the Shire" map provides a wealth of geographic detail for the Shire not found anywhere else.

J.R.R. Tolkien had drawn four extant maps of the Shire. Eventually Christopher Tolkien drew a large-scale map in 1943, in which he had some freedom to develop the details north of the Water. Many village names are actual English place-names (cf. Nobottle, Rushock, Newbury, Needlehole), or emulate english toponymy. Christopher believes that he consulted the large collection of his father's books on English place-names from which he made his proposals, such as "Nobottle". To that map J.R.R. Tolkien also made his own additions, adding Budgeford, Bridgefields, and the road between Whitfurrows and Scary. There were also more names, such as "Chivery", "Goatacre", "Ravenbeams" and "Long Cleeve" that don't appear in the published map.[1]:p. lvi

For the final version of the map, J.R.R. Tolkien didn't allow those names that "he thought poorly of". The final map was drawn again by Christopher in March 1954.[1]:lv

In his copy of the Fellowship Tolkien added the Yale, which was added since the second edition (1966) and afterwards.[2] Tolkien also changed the position of Brandy Hall for the second edition, to be before the Buckland road, consistent to the narrative.[3][1]:p. lxi

An Aid to the Story[edit]

The "Part of the Shire" map runs 60 miles north to south and stretches 105 miles east to west. Pieces (only) of all four Farthings, all of Buckland, and a sliver of land to the east of the Shire are shown. From the narrative's "point of view" the map allows the reader to trace the start of Frodo's journey to Rivendell, covering the trip from Chapter 3, "Three is Company", through part of Chapter 6, "The Old Forest" of Book I in The Fellowship of the Ring.

Also it serves as a reference for the locations of events from Chapter 8, "The Scouring of the Shire" of Book VI in The Return of the King. Indeed, J.R.R. Tolkien wished the map to be reprinted in the third volume, but it didn't happen.[1]:p. lvi

However, this map also reveals many points of interest beyond the necessities of the plot. Twenty-one towns and villages are plotted on the map, with arrows pointing towards five Shire habitations not shown (plus an arrow that points towards Bree). The entire courses of the Stock-brook, Thistle Brook, and Shirebourn River are shown, as well as sections of The Water, the Withywindle, the Brandywine (Baranduin), and an unnamed stream from the north that flows into the Bywater Pool (which may have been the Norbourn). The whole forested area of the Woody End is on the map as well as parts of Bindbole Wood and the Old Forest.

The villages on the map are indicated by very small black squares and rectangles clustered in groups. While reminiscent of buildings they probably do not represent the actual layout of the villages. The amount of "buildings" seems to indicate the relative size of the towns and villages shown but since no population numbers were ever given for any Shire town no quantitative judgments can be formed from this map.

In a 1965 letter to Dick Plotz (see Letter 276), Tolkien mentioned that there were only about 30 place names in the "Part of the Shire" map and that there were more in his map. If a proper map of the Shire were drawn up there would be quite a large number of places named. Unfortunately, no such map was ever published.

While making the various maps for the books, and synchronizing them to the narrative descriptions, Tolkien had to decide whether he would follow the map or the text, but about the Part of the Shire, he thought it was faulty and needed a lot of corrections and additions. Some of those noted were:

"...the Ferry at Bucklebury and to Brandy Hall and Crickhollow have shifted about 3 miles too far north (about 4 mm.). This cannot be altered at this time, but it is unfortunate that Brandy Hall clearly on the river-bank is placed so that the main road runs in front of it instead of behind. There is also no trace of the wood described [in A Short Cut to Mushrooms]. I have had simply to disregard these map-errors."
― J.R.R. Tolkien[4]

The position of Brandy Hall was corrected in subsequent editions (look above). Other questionable points:

Waymoot/Waymeet
On the "Part of the Shire" map, on the East Road west of the Three-Farthing Stone is the town of Waymoot. In the chapter "The Scouring of the Shire", this town (where the ruffians kept sheds) was named Waymeet.[6] "Waymeet" is a more modern spelling of the older form, "Waymoot", which was Tolkien's preference in early drafts of The Return of the King. Though he ultimately modernised the name within the book itself, this map was never corrected, and still carries the older spelling.[1]:p. 660

Bindbole/Bindbale Wood
In the 1954 edition of The Fellowship of the Ring the letter 'o' in Bindbole was unclear and appeared to be the letter 'a'. The name was rendered at Bindbale in maps by Barbara Strachey and Karen Wynn Fonstad, in Robert Foster's The Complete Guide to Middle-earth, and even by Tolkien himself in a manuscript note when he prepared the document later known as Nomenclature.[1]:p. lvii

Hobbiton Road and Stock Road
These roads are mentioned in the narrative but no such names are marked on the map. Only an unnamed road is marked, which joins Tuckborough with Stock through Green Hill Country and Woody End — Fonstad identified this road as the Stock Road.[7]
Concerning the road from Hobbiton to Overhill (possibly the Hobbiton Road), it seems to run east of the Hill, which however is inconsistent to the illustration The Hill: Hobbiton-across-the Water, showing that road running west. The discrepancy has been noted by Barbara Strachey.[1]:p. lx