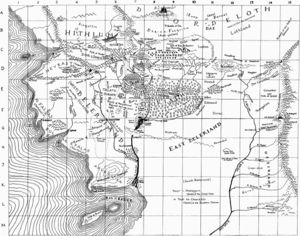 The map in The War of the Jewels

The Second 'Silmarillion' Map is a map (on four sheets) drawn by J.R.R. Tolkien of Beleriand, dating from the early 1930s. A redrawn version of the map was reproduced by Christopher Tolkien in 1987 as an Appendix to The Lost Road and Other Writings. This map was the basis for the Map of Beleriand and the Lands to the North included in The Silmarillion (1977).[1]

The War of the Jewels (1994) provided yet another reproduction of the Second 'Silmarillion' Map, featuring "subsequent alterations and additions", with commentaries on the changes.[2] Furthermore, Christopher reproduced in the same volume a redrawn version of a photocopy of the North-east section of the same map, kept and annotated by his father.[3]