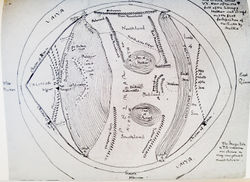 Map of early Arda by J.R.R. Tolkien; the Sea of Ringil is the southern water body.

The Sea of Ringil was an inland sea south of the Sea of Helcar. It was created by the fall of the Lamp Ormal, which was atop the tower known as Ringil.[1][2]

During the tumult of the Battle of the Powers, it grew in size and "became a great sea flowing north-eastward and joining by straights both the Western and Eastern Seas"[1][2] and divided Middle-earth into two landmasses, the southern of which was called the Dark Land.[3]