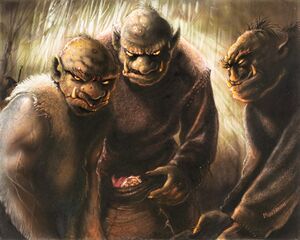 Stone-trolls were a race of trolls in the service of Sauron. Not much is known of these creatures, except that they inhabited the Westlands of Middle-earth and that they spoke a "debased form of the Common Speech".[1] It is possible that they were not actually living beings, but mere counterfeits made by Melkor, and they would return to their stone images once exposed to the light of the Sun.[2]

Bert, Tom, and Bill — the trolls encountered by Bilbo Baggins and his companions on their journey to Erebor — were likely of this kind, as they spoke Westron.[3][4]

The three trolls attempt to trap and carry the Dwarves in bags. This is reminiscent to the scene in Beowulf where Grendel carries his human prey in a glove.[7]