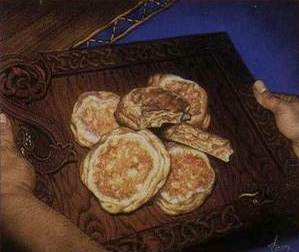 In The Etymologies, cram is said to be a Noldorin word (the precursor of Sindarin), from a root (KRAB-) meaning "press".[3].

cram also has relevant meanings in English, like "To eat greedily, and to satiety; to stuff oneself".