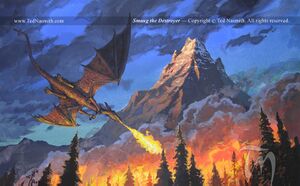 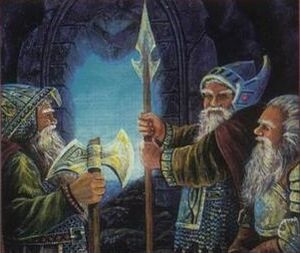 Under Dáin's rule the Dwarves of Erebor became very rich and prosperous. They rebuilt the town of Dale, their trade greatly increased with their kinsman in the Iron Hills once again and with Men; and the Lonely Mountain was restored to its original greatness. But once again trouble began to brew in the east. The Men of Dale were nearing war with the Easterlings, and in the year T.A. 3019 an emissary from Sauron came to Dáin and said that if he were to give up the location of Bilbo (who had discovered the Ring of Power in his travels) that Sauron would return to him the three remaining Dwarven rings. But being wary of the emissary, Dáin sent his kinsmen Glóin to Rivendell to warn Bilbo that Sauron was after him.