Middle-earth Enterprises, formerly known as Tolkien Enterprises (sometimes abbreviated to TE), is the division of the Embracer Group to manage it's licenses for The Lord of the Rings and The Hobbit.

In 1969, J.R.R. Tolkien sold certain rights to United Artists, for US$250,000.[1] This was then resold to independent producer Saul Zaentz in 1976, who in turn formed Tolkien Enterprises in 1977.[2] Ralph Bakshi, who had tried to argue with United Artists over an animated feature film for years, found more success with Zaentz. With a budget of US$7 million, it became quite an endeavour.[3] 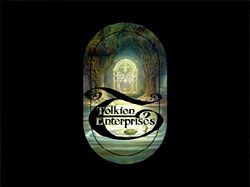 After Bakshi's box office failure, and the non-success of the Rankin/Bass productions, Zaentz was reluctant to market another adaptation, but would grant license to Peter Jackson if he could find a production studio. After being turned down by Miramax, New Line Cinema went ahead with the film The Lord of the Rings.[4]

In 2010, the company changed it's name to Middle-earth Enterprises, which is it's current name.[5]

In 2022, the Swedish holding company Embracer Group bought Middle-earth Enterprises, along with the rights for adaptations of The Hobbit and The Lord of the Rings.[6]