The mallorn (pl. mellyrn[1]) was a kind of large tree growing in Valinor, Númenor and the Westlands.

Mellyrn are trees of immense size, especially when growing in Númenor. They are also described as similar to beeches: their bark was smooth and silver-grey, and the leaves were green on top and silver underneath; they turned golden in autumn and remained on the tree through the winter to fall to cover the ground in the spring, when new leaves sprouted. Golden flowers bloomed on the branches.[2]

Frodo Baggins explained that he could feel the life of the tree when he touched a mallorn in Lothlórien.[5] 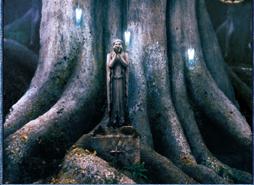 Mallorn Tree in The Lord of the Rings Trading Card Game

Mallorn-trees originally grew in Valinor and from there were spread to Tol Eressëa by the Elves once the Lonely Isle was moved to its final position by Ulmo. The Elves of Tol Eressëa brought mallorn-trees to the Men of Númenor and they grew on the shores around the Bay of Eldanna in that land.[2] Even Tar-Aldarion, the great Ship-King, did not cut down these trees.

Mallorn-nuts were given by Tar-Aldarion to his friend Gil-galad, the Noldorin King of Lindon. The mellyrn did not grow in Lindon, but Galadriel took some nuts with her to Lothlórien, where they grew to immense heights (but not as great as the groves of Númenor).[2] Lothlórien became known as the Golden Wood because of them.[6]

Caras Galadhon, the city of Galadriel and Celeborn in Lothlórien, was built in the branches of huge mallorn-trees. The Fellowship spent the night in a flet in a mallorn-tree nearby, and were later given lembas wrapped in mallorn-leaves.[3]

Galadriel gave Samwise Gamgee a box of soil containing a single silver mallorn nut.[7] After the War of the Ring and the Scouring of the Shire, Sam planted the nut in the Party Field where the Party Tree had stood before its felling. It was the only mallorn-tree in Middle-earth outside of Lórien. When the tree bloomed in the next summer it was said that all the Shire became golden from the flowers.[8]

By 1956 Tolkien had been informed about "a new house far away [that] has been called The Mallorns" — regrettably, Tolkien noted, as the correct Sindarin plural would be mellyrn.[1]

Mallorn is also the journal published by The Tolkien Society.

2006: The Lord of the Rings: The Battle for Middle-earth II:
Mallorn trees are the core buildings in the elven faction, as they produce resources needed for constructing buildings and recruiting troops. When a mallorn tree reaches level 3, a tower is automatically constructed atop of the tree, where an elven archer is placed.