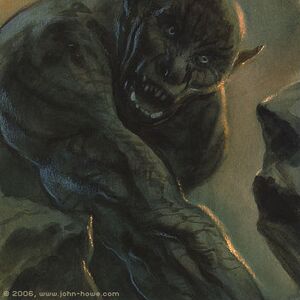 ". . . For the moment they are hanging back, but there is something else there. A great cave-troll, I think, or more than one. There is no hope of escape that way."
― Gandalf, The Bridge of Khazad-dûm

A race of monstrous Trolls that served Sauron and were found in caverns and dark places, the Cave-trolls are known from an encounter with the Fellowship of the Ring as they passed through Moria, but were evidently found elsewhere in Middle-earth, too. These trolls, along with Orcs and perhaps other creatures, were originally sent to inhabit Moria by Sauron some five hundred years before the War of the Ring.

The cave-trolls of Moria were of huge size with a skin of dark green scales, and flat, toeless feet. The fact that Gandalf was able to recognise the creature he encountered in Moria specifically as a cave-troll strongly suggests that this appearance was shared by others of the kind.