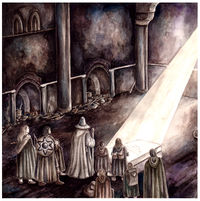 The Chamber of Mazarbul was the old chamber of records of Khazad-dûm. Probably built during the earlier years of Khazad-dûm, it was later used as a base by Balin when he began his ill-fated attempt at recolonization in the late Third Age. 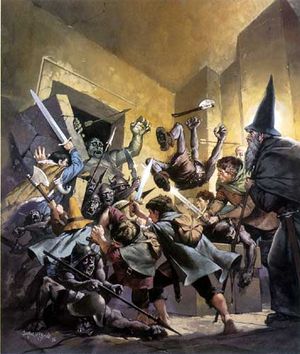 The chamber itself was probably built at around the same time as the Twenty-first Hall in the Seventh Level. This would have been slightly later than the earliest Dwarven delvings, which were to be found in the lower levels near the Great Gates.

In T.A. 2989, Balin led a group of Dwarves to recolonize Moria. Balin chose the Twenty-first Hall as his headquarters and set up his seat in the Chamber of Mazarbul. When Balin was killed a few years later, he was laid to rest in a tomb inside the chamber. It was there where the remnants of the colony made their last stand, and perished.[2][3]

The Fellowship found the chamber thirty years after Balin came to Moria and it was here that Gandalf found the Book of Mazarbul, a record of Balin's recolonization efforts. While still in the chamber, the Fellowship was attacked by a band of Orcs. After a brief fight, they retreated through the east door. Gandalf attempted to guard the door against the Balrog, until the roof of the Chamber collapsed.[3]

The chamber was located to the right of a pathway that branched off the north end of the Twenty-first hall. When the Fellowship found the chamber as they passed through Moria, Balin's Tomb was located inside it, and a bright shaft of sunlight streamed in from outside the mountain to land directly on the tomb.[2]

The chamber was large, square, and dimly lit.[2] There were two stone doors leading into it (one entrance from the Twenty-first Hall, one from the stair tunnels that the Fellowship later used to flee the Balrog). Many deep recesses were cut into the chamber rock containing chests that had been looted by the Orcs inhabiting Moria. A deep dust had fallen upon the entire room by the time the Fellowship entered it, and the remains of a long-abandoned battle site were to be seen strewn across the floor.[3]

The Chamber of Mazarbul in The Lord of the Rings: The Fellowship of the Ring.

In Peter Jackson's The Fellowship of the Ring (Scene 35: Balin's Tomb and Scene 36: The Bridge of Khazad-dûm), the Chamber of Mazarbul is presented much as it is described in the books, with a few notable exceptions.

The Chamber of Mazarbul is the final stand in the battle for the Twenty-first Hall, one of the three battles where the Iron Garrison battle Orcs to drive them out of Khazad-dûm in Mines of Moria, Book V: "Drums in the Deep".