"Renewed shall be blade that was broken,
The crownless again shall be king."
― Riddle of Strider

Andúril was the name for the sword Narsil after its reforging in Third Age 3018 for Aragorn, the heir of Elendil.

Its blade had engraved the designs of Seven Stars between the rayed Sun and the crescent Moon[1], symbols of Elendil, and his sons Anárion and Isildur. It also had many cirth. Its blade was notably brilliant, justifying its name.[1] Later, it was given an Elven sheath with a tracery of flowers and leaves wrought of silver and gold and the name Andúril and the lineage of the sword set in elven runes formed of gems.[2]

Narsil was a symbol of the kingship of Arnor and Gondor, but was broken at the end of the Second Age. Its fragments remained an heirloom for the Kings of Arnor, and the Chieftains of the Dúnedain.

Boromir, son of the Steward of Gondor, travelled to Rivendell for the Council of Elrond because of the prophetic dream of his brother Faramir. The dream told him to "seek for the Sword that was broken".[3] 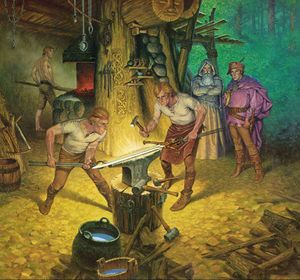 "The Reforging of the Sword" by Darrell Sweet

Aragorn carried the sword during his journey south as part of the Fellowship of the Ring, and fought with it, the Sword That Was Broken or the Sword Reforged. In his departure of Lothlórien, the first of the Gifts of Galadriel was Andúril's sheath, specially made for it.[2]

Aragorn often used the sword to help establish his credentials as the Heir of Isildur and the throne of Gondor.[4][5]

Andúril means "Flame of the West" in Quenya,[6] composed of andúnë ("west") and ril ("brilliance"). "West" here refers to Númenor.

Broken swords that are reforged are also seen in the Volsungasaga and the Nibelungenlied.[7]

Because of Aragorn's warrior-persona in this video game, Andúril merely serves as a melee weapon upgrade after Rivendell.[8] Aragorn does not use the broken sword at any point prior. Notably, the sword's blade is constantly illuminated; it glows red during the day, and blue at night. In the game's credits, artist Jason Rosenstock is explicitly mentioned as the designer of Andúril.[9]

Narsil remains broken and Andúril is not reforged in the Fellowship of the Ring movie. Shards of Narsil are kept on a display in Rivendell.

In The Two Towers, when asked by Háma to disarm outside Meduseld, Aragorn is very reluctant, saying that normally he would give up his weapon, "if I bore now any sword but Andúril".[5] This scene and dialogue is omitted from the film on the grace that the sword Aragorn surrenders there was not Andúril.

In the extended edition, the Mouth of Sauron refers to the blade as Elvish; this could either be a reference to its reforging or a mistake on behalf of the writers.[10]

Andúril is represented as a permanent upgrade called "Andúril's Fury" for Aragorn, who is represented as a hero unit. It makes his sword glow white as well as increasing his damage greatly, with bonus damage against enemy Heroes, Wraiths, and the Nazgûl.

The reforging of Narsil is experienced by the player in the quest arc called "The Blade that was Broken". The player sets out to find the last of the Silithair, shining adamants crafted by Elves of the house of Fëanor in days of old, in order for the Elven smiths of Imladris to reforge the sword into Andúril.[11]