The ancestors of the Haladin moved from Hildórien to the West. During their migration they joined the Drúedain near the White Mountains and stayed with them on friendly terms.[source?]

When the core of their team was pressed to wander on, some Drúedain accompanied them northwards[source?], passing through the opening between the Misty Mountains and the White Mountains. Many stayed behind because of the dense forest covering the Minhiriath and the western half of Enedwaith between the Greyflood and the Isen and became herd-tenders. Their descendants were peoples in the forests of the shore-lands south of the Blue Mountains, especially in Minhiriath[1]

Their kin of the White Mountains apparently were later driven off (from the most part) by Men of Darkness during the Dark Years, removed to the southern dales of the Misty Mountains and thence some passed into the empty lands until the Barrow-downs, from whom came the Men of Bree.[2] 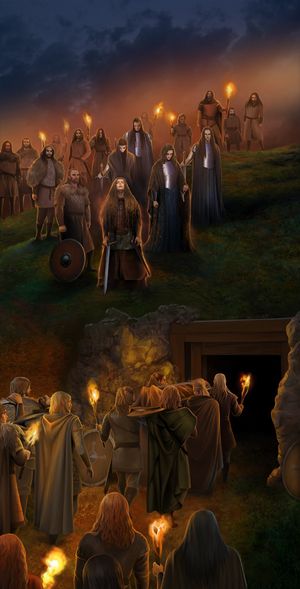 The Haladin entered Beleriand in F.A. 312.[3] They came secretly in small parties in the woods of Ossiriand, and were in strife among themselves. The Laegil were unfriendly to them. Their numbers are not known, but they were probably more than 2000.[4]

Unlike The House of Bëor before them and the House of Hador after, they did not advance to Estolad but instead dwelt without leave in the south of Caranthir's realm of Thargelion.[5] The Haladin had no overall leader and so settled in scattered groups in that region.

Morgoth already knew about the coming of hostile Men to Beleriand and sent his servants to afflict the Haladin.[4] So their style of living came to an end in F.A. 375 when a host of orcs assaulted their territory. In answer to this Haldad took command of the people, building a stockade between the angle of the rivers Gelion and Ascar south of Sarn Athrad. There he led the defence of his people until he and his son Haldar were slain whereupon his daughter Haleth took up the leadership of the house and held out for a week until Caranthir's army could relieve them.[5]

In honour of the valiance of Haleth, Caranthir offered the House of Haleth a feif in his lands but Haleth declined and instead led her people away passing through Estolad and Nan Dungortheb before temporarily inhabiting Talath Dirnen. King Thingol of Doriath granted to Haleth the Forest of Brethil on condition that she defended the Crossings of Teiglin. She led then her people (now known as the House of Haleth in her honour) and they settled as woodsmen centered around the capital of Amon Obel. For the following years they guarded the northern flank of Nargothrond.[5]

After the loss of Dorthonion, their numbers were joined by refugees from the First House.[5]

After the fall of Minas Tirith, the Haladin were harassed by frequent Orc-raids in the Crossings from Tol-in-Gaurhoth.[5]

When the Union of Maedhros was formed, Halmir offered the aid of the House of Haleth and made preparations for war but a year prior to the Nirnaeth Arnoediad he died and the promise was left for his son Haldir to fulfill. Haldir took part in the battle where the Haladin covered the retreat of Fingon and suffered heavy losses on Anfauglith. Haldir was slain alongside his brother Hundar.[5]

The son of Haldir Handir took up the leadership but he himself was slain in one of the many orc raids on Brethil at that time and the position passed to his son Brandir. Their defeat allowed the forces of the enemy to access and sack Nargothrond.[5]

After the death of Handir the Haladin dwindled and became more reclusive but survived on. They remained in their woods, occasionally ambushing Orcs at the Crossings.[5]

But their dealings with Húrin and his cursed kin were not yet over for Húrin himself came among them after twenty eight years of captivity in Angband. Now a broken man he succeeded in sparking a civil war in the House of Haleth owing to his perception of the treatment of his wife whom he found at the grave of their children. Obel Halad was burnt and all potential heirs slain or driven away in the anarchy that followed.[6] In that way did the House of Haleth cease to be in the year F.A. 500. The Drúedain who had dwelt in Beleriand were reduced to a few families of mainly women and children, who fled to the Mouths of Sirion.[7]

Few of the Folk of Haleth had survived the War of Wrath and the ruin of Beleriand,[8] and in the Second Age some of them, with the Drúedain living with them, settled the island of Númenor with the other Edain.[9] 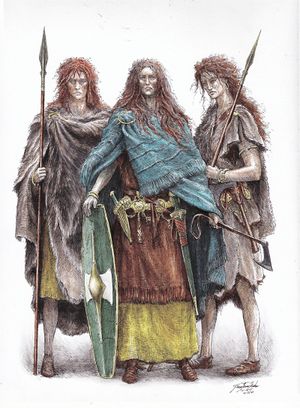 The Haladin belonged to a different branch than the other Edain of the west, and differed in a number of ways. They spoke an unrelated dialect of Mannish,[5] and although some of them learned Sindarin to communicate with the Eldar and the other Edain, they were not fluent in it.[4]

Their numbers were fewer[5] and their birth rates were slightly enough to compensate for their losses to the war; women were fewer than men, and many remained unwed.[4][12]

They were secretive and conservative, unwilling to adopt new things and customs, remaining apart, preferring solitude and to protect their woodlands instead of allying themselves with the Elves and participating to the greater events. They had their own customs and practices that seemed strange to the Elves and Edain alike, like their ancient practice of having women warriors and amazons (like Haleth, who had a picked bodyguard of women),[4] perhaps owing to their small numbers.[12]

Indeed, they excelled in forest warfare, and Orcs, even especially trained for this, dared not to cross their borders. They had a few dealings with the outsiders except their participation to the War where they proved loyal allies; reflecting their population, they sent small companies (rarely women[12]) beyond their borders, who were esteemed as redoubtable warriors.[4]

In battle they bore axes.[5]

Haladin is the Mannish term for this house, literally meaning "Wardens".[13] Halethrim is the rarely seen Sindarin rendering for "People of Haleth".[14]

In the notes to the Wanderings of Húrin, Christopher Tolkien points out an interesting usage of the term Haladin. It would seem that Tolkien at some point intended Haladin to refer only to the House of Haleth and not the Folk of Haleth as a whole.[13] In an isolated slip, headed Names, Tolkien also considered changing the term for a ruler of the People of Haleth from Halad to Halbar, meaning "Chieftain."[15]