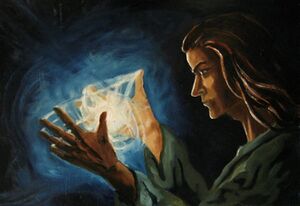 The Making of the Silmarils by Anna Kulisz

Silima was the crystaline substance invented by Fëanor to create the Silmarils. Only he could make it.[1]

"Like the crystal of diamonds it appeared, and yet was more strong than adamant, so that no violence could mar it or break it within the Kingdom of Arda." The Silmarils held the merged light of the Two Trees of Valinor, so this crystal was like the body which holds the spirit in the case of the Children of Ilúvatar. It was said that the secret of the substance from which it was made shall be only known when Fëanor returns in the End, after the Sun and Moon have passed away.[2]

Silima is Quenya and contains the element sil- ("shine (with white or silver light)").[3] It is an element in both silma-ril and silivren.[1]