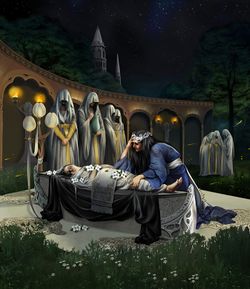 The Statute of Finwë and Míriel was a judgment made by the Valar concerning Elvish marriage. This ruling would ultimately have a major effect upon the history of the Noldor and the Children of Ilúvatar in general.

Finwë, the first King of the Noldor, and his wife Míriel Serindë had their first child, Fëanor. Unfortunately, the strain of bearing Fëanor caused Míriel to become weary and die. She left her body and went to the Halls of Mandos. For a while Finwë was patient with her, but eventually he became deeply saddened by her absence. He also wished to have more children. Míriel continually refused to return to life, however, so Finwë went to the Valar for help.

Finwë's petition proved very difficult to aid, because the Valar knew that it was against the design of Ilúvatar for the Elves to marry more than once. Míriel's death itself, moreover, was a quite abnormal event in a blessed land like Aman, and the Valar were perturbed both by it and her refusal to return.[1]

Manwë summoned the Valar in Council, and the chieftains and loremasters of the Eldar were also present. The debate was recorded among the books of Law, and it was called Namna Finwë Míriello, the "Statute of Finwë and Míriel". When the judgment of Manwë was done, he asked Mandos to announce it from the Doom-hill:

When the spirit of a spouse, husband or wife, shall for any cause pass into the keeping of Mandos, then the living may be permitted lawfully to take another spouse, if the former union be dissolved for ever.

Mandos explained that this dissolution of the marriage only happens by the will of the Dead or because a soul has been condemned to be in the Halls of Mandos till the end of Arda. Remarriage could only occur in this manner because, if the dead spouse returned to life and found his or her partner remarried, strife would result. Furthermore, because Elvish males and females were equal, the simultaneous union of one to more than one of the opposite sex was seen as unnatural. Because marriage was chiefly a union of the body, remarriage could occur only if one of the spouses was unbodied, and intended to remain so until the end of time (since marriage was supposed to be a life-long union). Since it was deemed wrong for the living spouse to constrain the dead one to remain unbodied, the living could not remarry unless the dead permitted them to.

The judgment was made known to Míriel, and she refused to return to life, even after being summoned and warned by Mandos. Nonetheless, Mandos proclaimed that twelve years had to pass till the disunion was official.[2]