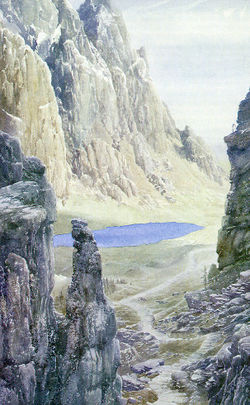 According to the Dwarves of Durin's Folk, after Durin the Deathless had awoken at Mount Gundabad in the north of the Misty Mountains, he travelled south until he came upon this lake. He looked down in it and saw a crown above his head, being the reflection of stars above, despite the fact it was day and the stars should not have been visible. Taking the crown as a sign, he founded the great city of Khazad-dûm beneath the mountains that fed Mirrormere.[1] A pillar called Durin's Stone was placed along the banks of the lake to mark the event.

During the events that led up to the War of the Ring, the Fellowship passed by the lake after escaping Moria. Despite their hurry, Gimli would not leave without looking in the lake. Frodo Baggins joined him, and both saw Durin's crown.[2]

In Khuzdul, the lake was called Kheled-zâram.

The Quenya name was Angal-limpë, containing angal ("mirror"). Abandoned versions of this name were Angal-millë and angalailin.[5]

Mirrormere is located just west of the East-gate and is the source of Celebrant. The player can make out stars on the surface of the lake during the day light hours and more clearly during the night time.