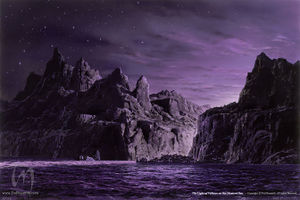 "Light of Valinor" by Ted Nasmith

Calacirya (Q, pron. [kala'kirʲa]), also known as the Cleft of Light[1], was the pass in the Pelóri Mountains north of Mount Taniquetil where the Noldorin city of Tirion rested atop Túna. It was so called because the light of the Two Trees came through the pass and lit Eldamar, and it is said that many jewels were embedded in the rocks of its wall.[2]

After the hiding of Valinor this was the lone gap through the mountains of Aman. The Valar would have closed the mountains entirely but, realizing that the Elves, even the Vanyar, needed to be able to breathe the outside air and see the stars, they kept Calacirya open. They also did not want to wholly separate the Vanyar and Noldor from the Teleri on the coast.[3]